Throwback Thursday: The 100th Anniversary of the Porvenir Massacre 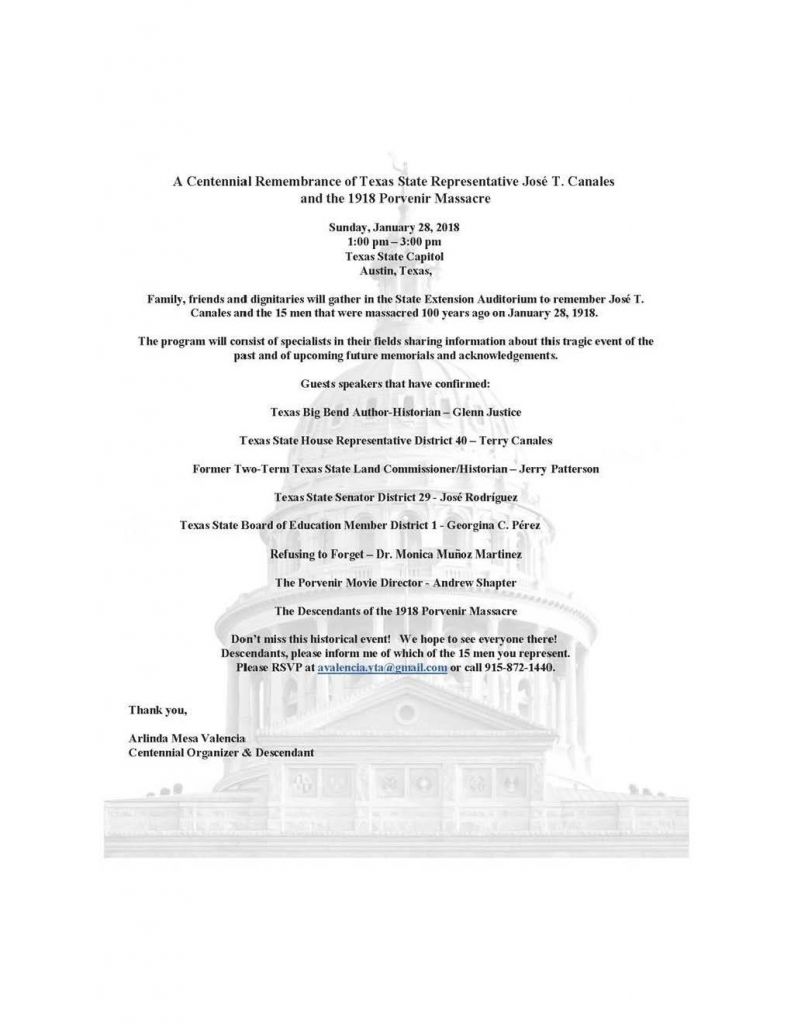 In late January, 1918, Captain J.M. Fox of Texas Rangers Company B ordered Ranger Bud Weaver to investigate the tiny border town of Porvenir, Texas after the Brite Ranch Raid. Over 1500 dollars worth of merchandise from the Brite Ranch store and three people on the arriving mail coach were killed during the raid. Porvenir had about 140 people living there, mostly of Mexican origin. At 1 a.m. on January 24, Rangers roused the sleeping people and searched their jacales, mud huts, which housed most of the villagers. They found two rifles and a shotgun which they confiscated. The Rangers held three men for questioning after discovering they wore a type of shoe that had been sold at the Brite Ranch store, though they released them several days later. The Rangers requested help from the US Army to subdue Porvenir.

Troop G, after presenting Captain Henry H. Anderson with a letter from Colonel Langhorne asking for army assistance at Porvenir, arrived shortly after midnight on January 28 where they once again woke everyone in the village and searched their homes. About 40 cavalrymen from Troop G joined the Texas Rangers at Porvenir.  They could find no stolen Brite property. The rangers then selected 15 men between the ages of 16 and 72, marched them to a rock bluff about a mile south of town, and shot them to death. The Rangers immediately left by horse, yelling drunken Comanche-like shouts. The killings were said to be a retaliation for the Brite Ranch raid. Upon discovery of the bodies, most of the survivors fled across the river to Pilares to bury their dead. Most of the victims were fathers with large families. Some had been unlucky enough to be visiting their families at the time of the massacre.

A nearby resident was lawyer and School Master Harry Warren whose father-in-law, Tiburcio Jacques, was killed in the massacre. Warren and neighboring rancher J.J. Kilpatrick were determined determined to bring justice to the innocent people of Porvenir. Later, a false article attributed to Captain Fox (who had not been at the massacre), painted an entirely different picture where Fox claimed his soldiers were shot at by the Porvenir citizens. The truth came out soon after when a U.S. Army special inspector looked into the charges by Warren and Kilpatrick. The inquiry eventually led to Fox’s resignation.

The Texas Rangers were charged with 18 cases of corruption and abuse of Mexican citizens before a joint committee of the Texas Senate and House. The slaughter at Porvenir was the most serious charge. The result of the investigation was the complete reorganization of the Rangers, including a reduction in numbers. The Texas State Legislature also passed a law saying that anyone could press charges against a Ranger. No criminal charges were filed against the men responsible for the massacre.

The Archives holds both the Papers of both Harry Warren and J.J. Kilpatrick  which include fascinating accounts and information on border tension during the Mexican Revolution era. Included in the Warren Papers are handwritten notes documenting the Porvenir massacre. Other materials held by the Archives on the subject include oral histories, photographs, and books.

To commemorate the 100th anniversary of the massacre, Texas state legislators, historians, and Porvenir descendants, are honoring the 15 men killed at Porvenir on January 28, 1918. The gathering will be held at the Texas State Capitol Extension Auditorium in Austin on January 28, 2018. Flyers are available in Archives. There is also a documentary and a Hollywood film in the works.

Brite Ranch. The Porvenir Massacre was said to be revenge after Mexican bandits attacked the ranch and stole merchandise and food from the company store