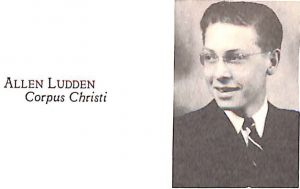 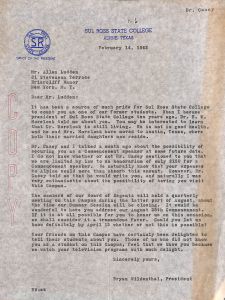 In the letter, it is clear that Sul Ross President Dr. Bryan Wildenthal, and Dr. Casey requested that former Sul Ross student Allen Ludden speak at the 1962 graduation. It is likely that Ludden was one of Dr. Casey’s students when he attended Sul Ross in 1936-1938.  Who was Allen Ludden?

While Ludden was a young student at Sul Ross, he was very active on campus. In the 1936-1937 school year (Ludden’s sophomore year), he was a member of the Choral Club where he served as President, Theta Gamma (a music club), the student council, and Mask and Slipper (college dramatic society). During Ludden’s junior year, he was a member of the Brand staff, a member of Gamma Iota Cast of Alpha Psi Omega (honorary dramatic society), and continued his involvement with Mask and Slipper. While at Sul Ross, Ludden majored in Speech. He did not graduate Sul Ross, and transferred to the University of Texas at Austin in 1938 where he graduated with honors with a Bachelor’s in English and went on to receive a Master of Arts in English in 1941. His last year at Sul Ross was his Junior year in 1938 where he is featured in the Brand yearbook.

In Ludden’s Sul Ross File, information about his life and career post-Sul Ross is also detailed. Ludden’s early theater performances in Austin, 1938-1939, are documented in the Sul Ross Skyline and his Sul Ross file. In a Feb 9, 1967 article, the Alpine Avalanche wrote that Ludden had won the “Texan of the Year” award for his role in the CBS program, Password.

Ludden is best known for two things: being the host of the popular game show Password between 1961 and 1980, and being the last and final husband of Betty White, whom he met on the set of Password c. 1962. White had been a frequent guest on the game show.

This episode of Password was filmed shortly after their marriage in 1963. If you want to have an idea on Password game play, skip to around the 2:40 mark.

Betty White considered Allen Ludden the love of her life and she did not remarry after his death from stomach cancer in 1981. 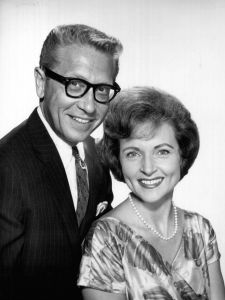