The Archives holds the Papers of D.A.T. Walton, b. 1837-1915. Walton was a Texas Ranger, Confederate Captain, Sheriff of Bee County for 19 years, and Sheriff/Tax Collector of Brewster County for 8 years. His collection includes correspondence, photographs, scrapbooks, legal documents, and other materials. Of interest are his Civil War correspondence with his family members including brothers and sisters, and his wife Amanda.

David A. T. Walton was born in 1837 in Alabama but after his father’s death moved while young with his mother to Seguin, Texas. At the age of sixteen, Walton joined the Texas Rangers serving in Callahan’s Company. In 1855, Walton began ranching in Atascosa County, Texas, where he met and married Amanda Lee in 1860. They moved to Bee County, Texas, shortly thereafter. During the Civil War, Walton served in the Confederate Army in Company K, 21st Texas Cavalry where he was commissioned Captain. After the Civil War, Walton returned to Bee County where he served as sheriff for nineteen years. Leaving that position, he was appointed sheriff/tax collector of Brewster County, Texas, in 1900 and was later elected in 1904 and 1907 to the same position. Because of poor health, Walton moved to Sabinal, Texas. In 1910, Mr. and Mrs. Walton celebrated their golden wedding anniversary. Although advanced in years, Walton sought in 1913 and 1914 appointment as U.S. Marshall for the Western District of Texas.   His efforts failed. In 1914 Amanda Walton died. D. A. T. Walton’s health failed quickly and he died in 1915. Both are buried in the Alpine Cemetery in Alpine, Texas. 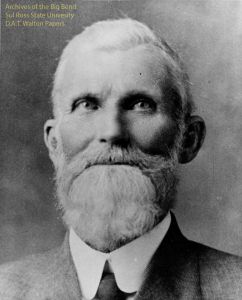 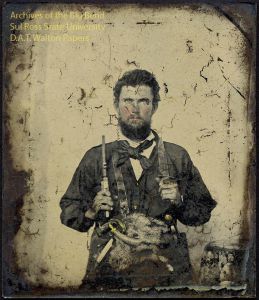 In this letter, D.A.T. Walton writes to his sister about the death of her husband during the war.