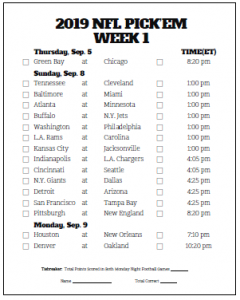 This fall, the Sul Ross Library will host the NFL Pick ‘Em contest for its fifth year in a row. Pick ‘Ems Commissioner and Library Circulation Desk Supervisor Cindy Slocumb described the origin story of the Pick ‘Ems earlier this week.

“It was my football-loving student workers at the time who made it happen! Three of them: Ale Ortega, Sonny Galindo, and Vivi Rivera. They wanted to do it and they figured out how to make it happen by getting all the forms together.” For the love of the game, a super engaging competition was born into the SRSU community.

Slocumb recalls that the first year’s competition was quiet and the only prizes were bragging rights. Each subsequent year the participation has grown and competition has become increasingly fierce among students, staff, and faculty who follow the NFL. And now, in its fifth year, participants vie for bragging rights and a gift card to select local restaurants. Additionally, a grand prize is awarded to the ultimate winner at the end of the season.

Follow along with the Fall 2019 NFL Pick ‘Em Contest on the first floor of the Library or here on our website. The easiest way to access the new NFL Pick ‘Em page and blog is under QUICK LINKS in the top navigation. As Cindy would say, “good luck and Go Texans!”